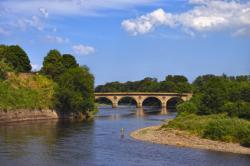 The Tweed is the principal river of the Scottish Borders. It flows 96 miles from source, at the suitably named Tweed's Well, to sea and is the fourth longest river in Scotland. At 1840 square miles the Tweed's catchment drains the entire Borders area and ranks as the second largest catchment in Scotland. Its main tributaries are the Rivers Ettrick, Gala, Lyne and Teviot as well as Leader Waters.

It rises close to the boundary of the Scottish Borders with Dumfries and Galloway just six miles to the north of Moffat . For a distance of about 16 miles the lower reaches of the Tweed mark the Scottish border with England. The Tweed flows through several major towns including Peebles , Galashiels , Melrose , Kelso , Coldstream and Berwick-upon-Tweed.

The river once served industry in the Borders including providing power for its textile mills. The Tweed flows through some outstanding countryside and past many famous sites such as Scott's View and the home of Sir Walter Scott at Abbotsford . Many country seats and the ancient abbeys of Dryburgh , Kelso and Melrose are situated along the river.

The Tweed is also internationally renowned for its excellent salmon fishing. The Tweed is unique in being the only river in England where an Environment Agency rod licence is not required for angling. Boating is another sport popular on the waters of the Tweed. Rapids along the river attract the experienced canoeist.

The river is spanned by the famous Berwick Bridge. Also known as the Old Bridge, the structure spans the River Tweed in Berwick-upon-Tweed . The bridge is a Grade I listed building and was erected between 1611 and 1624. Despite its age, the bridge is by no means the first to stand on what has proved to be a difficult site. Four bridges preceded it, two were destroyed by flooding (the original in 1199 and, in 1294, the third). One fell victim to war between the Scots and the English in 1216. The fourth bridge on the site was originally built in 1376. It was demolished when King James I of England ordered the construction of the present bridge. At the time of construction the bridge lay on the main London to Edinburgh road. The king (who was also James VI of Scotland) had reason to cross the wooden bridge in 1603 while travelling to London for his coronation. Shocked at the terrible condition of the old bridge he decreed it should be replaced with a much more substantial structure.