"Melrose is situated in the heart of the Scottish ...more 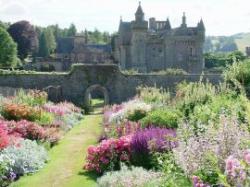 Sir Walter Scott purchased the Cartley Hall farmhouse on the banks of the Tweed in 1812. Together with his family and servants, he moved into the farm which he renamed Abbotsford.

Scott had plans for enlarging the house which were not carried out until 1818, and in 1822 the old house was entirely demolished, to be replaced by the main block of Abbotsford as it is today.

Scott was a passionate collector of historic relics, including an impressive collection of armour and weapons, Rob Roy's gun and Montrose's sword, and over 9,000 rare volumes in his library.

Visitors will see his study, library, drawing room, entrance hall and armouries, and the dining room overlooking the Tweed where Sir Walter died on 21st September 1832. There are also extensive gardens and grounds and visitors can view the private chapel which was added after Scott's death.