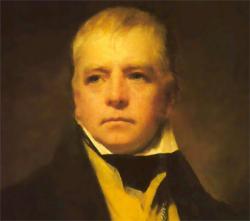 Born in Edinburgh, Edinburgh and the Lothians
Born on 15th of August 1771
Died in Melrose, Borders
Died on 21st of September 1832

'When thinking about companions'... More

Sir Walter Scott was born 15th August 1771 and died 21st September 1832. He was a Scottish historical novelist and poet who essentially pioneered the concept of the modern historical novel. He was born in Edinburgh, the son of Walter Scott, a solicitor. He suffered polio as a child and was sent to recuperate at his grandparents' home in the rural Borders region. Here he was taught to read by his aunt who taught him the speech patterns and many of the tales and legends which characterized much of his work. In 1778 Scott returned to Edinburgh to attend the Royal High School of Edinburgh. After finishing school, he returned to stay with his aunt in Kelso and attended the local grammar school where he met James Ballantyne, who later became his business partner and printed his books. He studied classics at the University of Edinburgh in 1783, enrolling at the tender young age of 12 years. He attended various literary salons where he met the likes of Robert Burns and Thomas Blacklock, before studying law between 1789 - 1790. He became a lawyer in Edinburgh and was admitted to the Faculty of Advocates in 1792. At the age of 25 he began dabbling in writing, translating works from German. His first publication was a rhyming version of ballads by B¸rger in 1796. He then published a 3-volume set of Scottish ballads, 'The Minstrelsy of the Scottish Border'. Scott became a volunteer in the yeomanry and in 1797 he married Margaret Charpentier. The couple had 5 children together. In 1799 he was appointed Sheriff-Deputy of the County of Selkirk, as well as continuing his career in law. He founded a printing press and began publishing his own poetry, beginning with, 'The Lay of the Last Minstrel' in 1805. He published a number of other poems over the next 10 years, including 'The Lady of the Lake', set in the Trossachs, and later set to music by Schubert. In 1809 he became co-founder of the Quarterly Review, a journal to which he made several anonymous contributions. In 1814 he began writing his first successful novel, 'Waverley'. It was a tale following its English protagonist, Edward Waverley, during the 'Forty-Five' Jacobite rising in the Kingdom of Great Britain. He wrote the novel anonymously and it met with tremendous success. There then followed a succession of novels over the next 5 years, each with a Scottish historical setting. The Dandie Dinmont Terrier takes its name from a character in Scott's 1815 novel, 'Guy Mannering'. He also kept his poems' identity a secret, publishing them under the name 'Author of Waverley'. In 1819 he broke away with writing about Scotland and produced 'Ivanhoe', a historical novel set in 12th-century England. It too was a hit, and he wrote several books along similar lines. As his fame grew, he was granted the title of Baronet, becoming Sir Walter Scott. In 1825 he began to have financial problems with his business and proceeded to write his way out of debt, producing a prodigious output of fiction under his own name until 1831. Scott's home was the historic house of Abbotsford in the Scottish Borders region which he first purchased in 1811 as a small farm of 100 acres called Cartleyhole. He built a small villa (now the western end of the house) and named it Abbotsford, and then built additions to the house using stone from ruined castles and abbeys of Scotland until it became the mansion and gardens that stand, now open to the public, today. Scott died at Abbotsford in 1832 and was buried at Dryburgh Abbey, Melrose.

Contributors: Do you have a site related to Walter Scott?
Supply some content for this page and we will gladly add a link to your site. Email here.