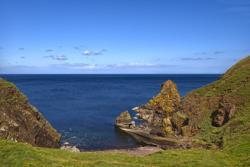 Five miles north of Eyemouth on the Berwickshire coast you can find one of Scotlands most recognisable landmarks at St Abbs Head.  It is situated at the very South East of the Scottish coastline, not far from the capital city Edinburgh and also close to Berwick . If you imagine that Britain is shaped like a head and torso, then St Abbs Head would be the left shoulder. The area was named after a Northumbrian Princess Aebbe, who founded a monastery nearby. She was later made St Aebbe and this was eventually corrupted to St Abb.

What is not so well known is that the area is a notable National Trust Reserve , housing many different species of seabird. The area was originally formed from volcanic activity and the resultant 300 foot high cliffs facing out to the North Sea lend themselves well to the nesting and fishing habits of the resident seabirds. The birds have to nest high in the cliffs because the North Sea constantly pounds the lower parts of the towering cliffs. St Abbs Head was Scotlands first marine nature reserve, the cliffs having been declared a reserve in 1983, and the waters a voluntary nature marine reserve in 1984. The nesting season runs from April through till August. Puffins and Herring Gulls are amongst the species that can be found at St Abbs Head, as well as the Kittiwake, the Shag, the Razorbill and the Guillemot. The early part of the season and the latter part are the best times for the migrant birds. May through to July is ideal for seeing seabirds and July and August is when flowers and butterflies are abundant in the area.

The crystal clear waters around St Abbs Head make for good fishing for the seabirds, and this is no doubt what attracted early human settlers to the area.  Fishing is still a strong part of the local village life, but the clear waters also attract a great many scuba divers to the area. The divers are drawn by the considerably wide variety of marine life that can be found in the waters off of St Abbs Head. Parking is available at the National Trust run visitor centre and there is a coffee shop onsite.  The cliff top walk from St Abbs Head to Pettico Wick should be approached with care as it can be treacherous. There is also good surfing to be found just a short way along the coast.