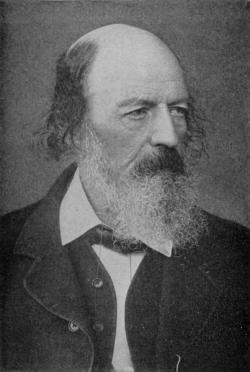 Born in Somersby, Lincolnshire
Born on 6th of August 1809
Died in Aldworth, Surrey
Died on 6th of October 1892

'Tis better to have loved and l'... More

Alfred, Lord Tennyson was born on August 6th 1809 and died 6th October 1892. He was considered the leading light of the Victorian age in poetry, with much of his verse based on classical mythology and medieval legend. Tennyson was born in Somersby, Lincolnshire, the fourth of 12 children of Reverand George Clayton Tennyson, rector of Somersby, and his wife Elizabeth. Tennyson's father had been virtually disinherited by Tennyson's grandfather in favour of a younger brother, making his father depressed and overshadowing much of Tennyson's early life. Tennyson showed a precocious talent and began writing poetry at the age of 8. He was a pupil at Louth Grammar School, alongside his 2 elder brothers, Frederick and Charles, with whom he later published a volume of poetry in 1825, 'Poems by Two Brothers'. In 1820 Tennyson left Louth to be educated at home by his father. In 1828 he entered Trinity College, Cambridge where he met his great friend, Arthur Henry Hallam. In 1829 he was awarded the Chancellor's Gold Medal at Cambridge for his poem, 'Timbuctoo', and in 1830 he published his first solo collection of poems, 'Poems Chiefly Lyrical' which included the celebrated poem, 'Mariana'. Tennyson had to leave Cambridge without finishing his degree when his father died in the spring of 1831. He returned home to assist his mother, and was joined by his friend Arthur Hallam in the summer. Hallam became engaged to Tennyson's sister, Emilia. In 1833 Tennyson published his second book of poetry, 'Poems' which received unfavourable reviews, discouraging him from publishing again for some 10 years. Later that same year, Tennyson underwent an even greater emotional blow when his friend Hallam suffered a cerebral haemorrhage and died. Tennyson was devastated, never properly recovering from the loss. After a brief move to Essex, Tennyson settled in Teddington, London and in 1842 published 2 volumes of 'Poems' which met with immediate success and included the pieces, 'The Two Voices', 'Lancelot and Guinevere' and 'Ulysses'. However, it was in 1850 that Tennyson reached his pinnacle, publishing his masterpiece, 'In Memoriam A.H.H.', dedicated to Hallam and dealing with his personal loss, but also touching on the subject of science conflicting with religious faith. Later that same year he was appointed Poet Laureate, as well as marrying his childhood friend, Emily Sellwood, with whom he had 2 sons, naming one of them Hallam. In 1853 the couple settled in Farrinford, a house in Freshwater on the Isle of Wight, which would be their home for the next 40 years. He also built a summer house on Black Down hill in Aldworth, Sussex. As Poet Laureate Tennyson produced one of his best known works, 'The Charge of the Light Brigade', a tribute to British cavalrymen involved in the Crimean War, published in his collection, 'Maud and Other Poems' in 1855/56. Between 1856 and 1885 he published, 'Idylls of the King', a cycle of 12 narrative poems retelling the legend of King Arthur. Queen Victoria was a great admirer of his work, and in 1884 made him Baron Tennyson of Aldworth, Sussex and Freshwater, Isle of Wight, a role he never really felt comfortable with. Tennyson also wrote several plays and produced a number of phrases still in use today such as: "nature, red in tooth and claw", and "better to have loved and lost". He died in his summer house at Aldworth and was buried in Poets Corner at Westminster Abbey.

Contributors: Do you have a site related to Alfred Lord Tennyson?
Supply some content for this page and we will gladly add a link to your site. Email here.