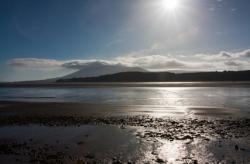 The Solway Coast is an area associated with the Solway Firth or estuary. The firth forms part of the border between England and Scotland on the west coast of Britain. It lies between Cumbria,
including the Solway Plain, and Dumfries and Galloway. Solway Firth stretches from St Bees Head, to the south of Whitehaven in Cumbria, to the Mull of Galloway, on the western end of Dumfries and Galloway. The coast looks out onto the Irish Sea.

The Solway Coast Area of Outstanding Natural Beauty boasts a wide range of coastal habitats that support an equally diverse selection of plants and animals. Wild herbs and flowers such as pale blue harebells, thyme, spiny restharrow and yellow kidney vetch can be found clinging on to the sand dunes. Wading birds such as lapwing, oystercatcher, and curlew are attracted to the sands at low tides
while skylark and barn owls fly above. The area is home to a particularly large population of wild fowl.

The area was heavily forested until the 1400s but now the woodland is in the minority while farm fields and hedgerows dominate the scenery. The mammals once commonly associated with most areas of rural Britain still thrive here, such as badgers, foxes, voles and hedgehogs.

The habitats range from raised beach to dunes, mud flats, salt marsh and peat moss. The Solway Coast Discovery Centre in Silloth is a useful destination for those wishing to learn more about this beautiful corner of Britain. The Centre explains, in an informative and entertaining way, how the area has developed throughout time. The
centre also has details of walks around Solway guided by local experts.

The expansive beaches and wide open nature of the land here has made the area famous for spectacular sunsets. Travel around the Solway Coast is relatively easy with many paths, bridle ways, quite country roads and cycle paths threading through the surrounding countryside and following the coastline. Accommodation for the visitor is plentiful and includes camping , touring and fixed caravan sites, lovely self-catering country or coastal cottages and hotels catering for all budgets and tastes.

If you are not satisfied with the simple pleasures of walking and enjoying the local scenery there's a wide range of other activities on offer in the Solway area. Mountain biking is very popular and the area boasts some spectacular man-made trails as well as those that follow more ancient or established off-road routes. The abundance of bird life means that bird watching is popular on the Solway Coast and there are many reserves and established hides to satisfy the bird lover. For those who like to combine walking with sport there are almost thirty golf clubs in Dumfries and Galloway area.