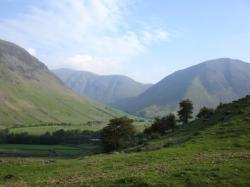 Scafell Pike, at 3,209 feet, is England's highest mountain. It is within the magnificent Lake District National Park in the county of Cumbria. The park occupies 855 square miles, contains six national nature reserves and more than 40 towns and villages. There are 16 lakes, 150 mountains and around 100 Sites of Special Scientific Interest. The Lake District National Park, England's largest National Park, is well known for the quality of the walking and cycling territory.

The Scafell Pike mountain is sometimes confused with the neighbouring Sca Fell. The two peaks are connected by the col of Mickledore. The confusion comes because the name 'Pikes of Sca Fell' was originally collectively applied to the three peaks, Scafell Pike, Ill Crag and Broad Crag. These three were previously thought of as the subsidiary tops of Sca Fell, which appears as the highest of the four from many angles. The contraction Scafell Pike itself originated as an error on an early Ordnance Survey map that became established.

The land has been the property of the National Trust since 1920. The area was donated to the trust by Lord Leconfield who gave it in memory of the men of the Lake District "who fell for God and King, for freedom, peace and right in the Great War".

The peak is very popular with walkers and climbers who flock to the Lake District from all over the world. The simple route for the walker aiming for the summit is from Wasdale Head at the north end of Wastwater to the west of the Pike. This is a steep but straightforward walk that can become quite crowded in warm summer weather. There are a range of other ascents that range in difficulty but all offer stunning views to the climber. The peak is justifiably famous for the quality of these vistas. From Scafell Pike, the highest ground in England, these panoramic views range from the Mourne Mountains to Snowdonia . Everything is weather dependent of course but on the right day an extensive range of mountains, hills and peaks can be seen from Scafell Pike. Lakes, valleys and a great expanse of sky help complete the picture.

Scafell Pike is one of three British mountains climbed as part of the National Three Peaks Challenge.

The nearby Borrowdale valley is a very popular tourist destination. The valley has plenty of hotels, guest houses, holiday cottages, bed and breakfasts, and campsites to cater or all types of visitor.