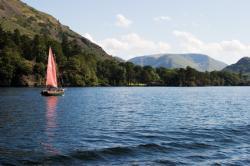 Situated at the southern end of the lake is the popular village of Glenridding. Mountain walkers are drawn here because it makes an ideal base for scaling England's third highest mountain, Helvellyn , as well as the many other challenging peaks nearby. The village has plenty of accommodation including two Youth Hostels and camp sites. At the opposite end of the lake is the village of Pooley Bridge. A narrow 16th-century bridge here crosses the River Eamont as it flows out of Ullswater. Dunmallard Hill, the site of an Iron Age fort, guards the river crossing.

The lake is synonymous with boating. Four of the famous Ullswater Steamers still offer trips around the lake, visiting Pooley Bridge, Glenridding and Howtown. The Steamers operate all year but are now all converted to diesel, two of them having been changed as early as the 1930s. The Steamers started life moving mail, workers and goods to and from the Greenside lead mine at Glenridding in 1850 and operated until it closed in 1962. Some walkers will take the Steamer from Glenridding to Howtown and then return on foot. This allows them to come back along the lake shore to complete one of the most renowned and scenic low level walks in the Lake District. There are a myriad of other paths in the area, some of which will provide a far sterner test to the walker than the shore line!

The lake has been the scene of some boating done at a far more frantic pace than the relaxing gait of the Steamers. The world water speed record was set there by Sir Donald Campbell on July 23, 1955. Campbell took the jet-propelled hydroplane Bluebird K7 to an officially recorded speed of 202.32 mph.

The Ullswater Yacht Club hold the prestigious Lord Birkett Memorial Trophy on the lake annually on the first weekend of July. Around 200 sailing boats compete in two races, both of which cover the full length of the lake