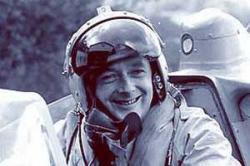 Donald Campbell CBE broke eight world speed records in the 1950s and 1960s and is still the only person to hold both land and speed records the same year: 1964. A dashing hero of post-war Britain his death was mourned by the entire nation.

Born on March 23, 1921 at Kingston-upon-Thames, Donald Campbell was the son of Sir Malcolm Campbell, himself the holder of 13 world speed records in his own career. Educated at Uppington Donald volunteered for the RAF with the outbreak of WWII but was turned down because of a childhood illness. Post-war he worked with Leo Villa, his fathers chief engineer, to make his first record attempt in 1951. However it was not until 1955 with the new jet-propelled Bluebird K7 designed by Ken and Lew Norris that he began to break records. Between 1955 and 1964 Campbell pushed his speed up from 202 to 276.33 mph and still remains the worlds most prolific breaker of water speed records.

Not content with being the fastest man on water Campbell had set his sights on the land speed record. Again designed by the Norris brothers the Bluebird Proteus CN7 was completed in 1960. After many setbacks including a fracture of the lower skull in a crash Campbell managed to set a new land speed record of 403.10 mph in 1964 on the dry bed of Lake Eyrie in Australia.

On January 4 1967 Campbell returned to Lake Coniston to make his final and fateful attempt on the world water speed record. On his return run Bluebird K7 hit turbulence and flipped into the air at 320 mph to break up on impact. Campbell was killed instantly. Following the discovery of his remains in June 2001 Donald Campbell was finally laid to rest in Coniston cemetery on 12 September 2001. His restored boat K7 will be housed in the Ruskin Museum nearby.

Links:
http://www.racingcampbells.com/ A tribute to both Father and Son

Contributors: Do you have a site related to Donald Campbell?
Supply some content for this page and we will gladly add a link to your site. Email here.