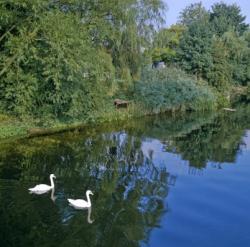 The River Ouse flows through North Yorkshire and, along with its tributaries, drains a large area of the Yorkshire Dales and the North Yorkshire Moors . The river is formed from the River Ure at Cuddy Shaw Reach near Linton-On-Ouse. The River Ure itself has already been swelled by its confluence with the River Swale just six miles upstream from Cuddy Shaw Reach. Other rivers feeding the Ouse include the Foss, Derwent, Wharfe, Aire, Don, Rother and the Nidd. The Ouse flows into the River Trent at Trent Falls, near the village of Faxfleet, where it forms the Humber Estuary .

The River Ouse flows through many settlements on its journey to meet the River Trent. Many of these are small towns and charming Yorkshire villages along the river such as Aldwark, Linton-on-Ouse, Barmby on the Marsh and Nether Poppleton. Larger settlements include the ports of Selby and Goole . In the 18th and 19th Century the river carried a great deal of commercial traffic and Selby became an established port complete with a custom house and a thriving shipbuilding industry. Coal, extracted from a myriad of coal fields in North of England including those at Selby, was the backbone of this trade. However, in 1826 the Aire and Calder Navigation opened and Goole came to prominence at Selby's expense. Goole is still a busy port today, despite the demise of the region's coal mines.

The most famous of all settlements on the River Ouse is undoubtedly the ancient City of York . Regarded by some as the jewel in Yorkshire's crown the city was originally a Viking settlement known then as Jorvik. It had previously been an important Roman town and was one of two Roman capitals in England. It was the Romans who first walled the city with stone. The city lies on the confluence of the rivers Ouse and Foss and is prone to flooding. The charming and narrow medieval streets known as the Shambles, along with the castle and the famous York Minster , draw huge numbers of visitors to York every year.

Boating is prominent on the river. There are many private boats moored along its banks and a myriad of craft are available for hire, day trips and even night cruises. The river is also very popular with fishermen and provides a host of variety. Perch, trout, bream, pike, dace, eels, chub and barbel are all present in the River Ouse.