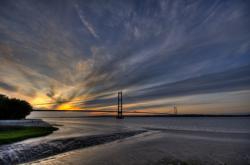 It is a common misconception that the Humber is a river, whereas it is in fact a tidal estuary formed by the confluence of the rivers Trent and Ouse . The Humber has its origin at Trent Falls at Faxfleet, where the two tidal rivers meet.

The estuary forms a formidable natural boundary between North Lincolnshire to the south and the East Riding of Yorkshire on the north side. This barrier is now crossed by the Humber Bridge.

Although approval for a bridge was granted back in 1959, it was not until 1973 that work on the much needed road link finally began. Prior to that, crossings had to be made much further up stream or by the entirely inadequate ferry crossing that had existed between North and South Ferriby since ancient times.

Traffic first crossed the bridge on June 24, 1981 although the official opening ceremony, performed by H.M. the Queen wasn't held until July 17, 1981. The massive suspension bridge is now an instantly recognisable landmark, although the tolls still levied to cross the bridge aren't so popular! The bridge held the record as the longest suspension bridge in the world for 17 years with its 2,200 metre total length and a main span 1,410 metres. The roadway is 30 metres above the water and the supporting towers are 155.5 metres high.

Those brave enough to look down while crossing the Humber Bridge might think the Humber's waters are filthy as they are usually murky brown in colour. However, the estuary has this appearance due to its high turbidity which stirs up the shifting sands of the estuary. The Humber is actually very healthy and there are many nature conservation areas and important nature reserves supporting a vast array of wildlife. These include those at Far Ings , The Bempton Bird Reserve , Humber Bridge Country Park Local Nature Reserve and the unique Spurn Point.

The Humber Bridge joins the small Lincolnshire market town of Barton-On-Humber to the important Yorkshire port of Kingston Upon Hull. Apart from its port facilities and sea-food processing plants, Hull is also home to The Deep which claims to be the world's only 'submarium'. The popular public aquarium was opened in 2002 and has entertained and educated over two million visitors with its unique combination of hands on interactive displays, audiovisual presentations and living exhibits.

Along the south bank lies the fishing port of Grimsby and Cleethorpes, the quintessentially English seaside resort neighbour which lies on the Greenwich Meridian. Visitors to Cleethorpes can enjoy three miles of wide sandy beaches, complete with traditional donkey rides for the younger visitors. Pleasure Island Theme Park provides the fun of the fair. The fair or the donkeys are not the only places in 'Clee' to take a ride, the resort is also home to the Cleethorpes Coast Light Railway . As any good seaside town should have a pier and at Cleethorpes, unlike so many other English resorts, the pier is still vibrant and in excellent repair. The resort also boast a vibrant nightlife with its many pubs, clubs and restaurants .