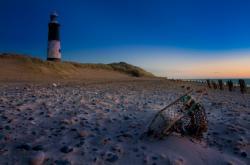 Spurn Point is a large, curved spit projecting three and a half miles across the Humber Estuary . Situated at a point on the coast of the East Riding of Yorkshire, England it forms the north bank of the mouth of the estuary. The fragile headland stretches out to almost half the width of the Humber Estuary and yet is as little as 50 yards wide in places. The southernmost tip is host to an RNLI lifeboat station and a disused lighthouse. The spit is made up of a series of sand and shingle banks that cling on to the shifting estuary bed with the help of binding effect of the Marram grass and Seabuckthorn growing there. A series of sea defence works were built there by the Victorians and subsequently maintained by the Ministry of Defence until they sold Spurn Point in 1950. Spurn was purchased by the Yorkshire Wildlife Trust who now care for the fragile ecosystem there. Despite being open to the ravages of the North Sea, Spurn Point is an important wildlife haven supporting colonies of migrant birds, lizards and roe deer as well as many species of insects. The point is popular with fossil hunters due to the abundance of fossils found amongst the pebbles on the beach.