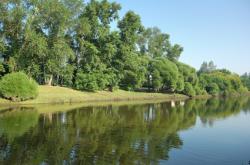 The River Ribble flows out of North Yorkshire and on through Lancashire to meet the Irish Sea at Lytham . The estuary here forms part of the Ribble and Alt Estuaries Special Protection Area for wildlife. Sections of the river are also a County Biological Heritage Site.

The river connects to the Leeds and Liverpool Canal and the Lancaster Canal. When the canals and rivers still formed the backbone of Britains transport system, the river was regularly dredged downstream of Preston.

The source of the river is usually given as being the confluence of Gayle Beck and Cam Beck, Selside. At this point the river is overlooked by the mountains of Whernside, Ingleborough and Pen-y-ghent, collectively known as Yorkshire three peaks.

The source is near Ribblehead. The Ribble valley here is the site of the longest and most famous viaduct on the Settle-Carlisle Railway, the Ribble Viaduct. The viaduct offers the rail traveller spectacular views of the surrounding countryside. Due to the fact that the viaduct is curved, passengers on the train also get to see the wonderful stone arches of the viaduct as the train passes over it. Ribblehead railway station lies less than half a mile to the south of the viaduct. The restored station now has a visitor centre which includes various exhibits from the stations long history.

Lovers of Britains railway heritage should visit the Ribble Steam Railway , based on Riversway Docklands in Preston . It houses one of the the UKs largest collections of standard gauge industrial locomotives. A project of restoration work in 2009, however, means that visits are limited to operating days.

The Ribble Way is a long-distance footpath which follows the river for much of its course. The Ribble valley itself is a rich, green landscape that is very popular with walkers. There are many paths and lanes threading through the Ribble valley, all of which provide delightful walking with wonderful views and scenery. It is often said that JRR Tolkein gained much inspiration for the Middle Earth, featured in the Hobbit and Lord of The Rings, from the area. He would often walk there, and spent much time visiting his son at Stonyhurst College . The Shireburn Arms at Hurst Green , Clitheroe was one of the authors favourite watering holes.

Walkers and cyclists alike are drawn to Gisburn Forest, the largest forest in Lancashire. A network of forest walks and a cycle trails runs for 10 miles through the forest, and three way-marked walks make for an easy introduction to Gisburn Forest.