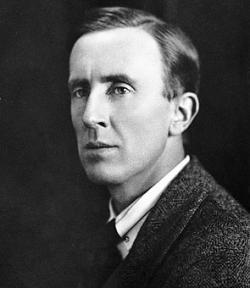 Educated at Merton College, Oxford. Became Professor of Anglo-Saxon there and of English Language and Literature. Interest in language and saga prompted him to write stories of a world of his own invention. Included are The Hobbit and the sequel The Lord of the Rings.

Contributors: Do you have a site related to J R R Tolkien?
Supply some content for this page and we will gladly add a link to your site. Email here.