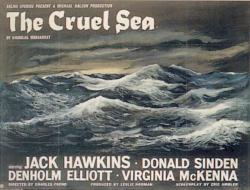 The Cruel Sea, released in 1953, reflects its original authors pacifism and real-life experience, and the period post- WWII when more mature reflection on the conflict was possible again. It is not so much the beastly Germans as the nature of war, and the greater power of the elements, that is explored.
It is also a film that features four of the greatest British voices ever to grace the movie business: whisky-throated Jack Hawkins ; the youthful but already fruity tones of Donald Sinden ; Denholm Elliots sharper nasal notes; and the great Stanley Baker s brutal valleys depths.
But it is the sea and the ships upon it that really star in the film. Both are beautifully realised by director Charles Frend who captures the Atlantics power and menace in full-screen majesty, the intimacy of the shipboard scenes in stark and telling contrast. Frend had two great writers behind him  Nicholas Monsarrat who wrote the original novel and spy-author Eric Ambler who produced the sympathetic and largely faithful-to-the-book script from it; but it is visual brilliance which makes the film so special.