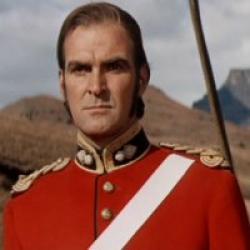 
Usually cast as the tough gritty villain, a notable early role was Bennett in The Cruel Sea (1953). In private his drinking partner and close friend was the other Welsh actor Richard Burton. A more endearing role was Henry Tudor in Richard III (1955), before his most memorable role alongside Michael Caine in Zulu. His own production company produced films such as Robbery (1967) and The Italian Job (1969). He was knighted in 1976.

Contributors: Do you have a site related to Stanley Baker?
Supply some content for this page and we will gladly add a link to your site. Email here.