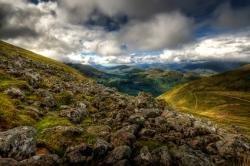 Arisaig
Did you know that during World War Two the SOE (special operations executive) conducted much of thier training around Arisaig. The SOE were forerunners of todays famous SAS. Arisaig House was used as a training centre and the local area under special security measures. The SOE dropped agents into occupied countries to support resistance movements and send intelligence reports to Britain. Their nickname  the Baker Street Irregulars  referred to their London HQ, but its echoes of the street boys who assisted Sherlock Holmes spoke too of the working class and sometimes criminal origins of many operatives.
Aviemore
Did you know that with an area of 4528 square kilometres the Cairngorms are Britains largest National Park? The smallest by way of contrast are the Norfolk Broads , covering only 305 square kilometres. Five of Scotlands six highest peaks lie within the park  as unsurprisingly does Scotlands alpine sports centre . Highest point in the park is Ben Macdui, 1309m (highest in the Broads is a dizzy 12m).
Ben Nevis
Did you know that among various strange ascents of Ben Nevis two have been made by car  the first in 1911 in a Model T Ford? The man who drove then returned in 1928 to repeat his feat in a Model A. A horse and cart have also made it to the summit; and a wheelbarrow. And for challenge and charity others have climbed the mountain carrying a bed; a barrel of beer; and a piano (but not all at once).
Glenelg
Did you know that Glenelg is the only Scottish town whose name is a palindrome? England can boast at least three  Eye in Suffolk , Hannah in Lincolnshire , and Notton in Yorkshire . The name Glenelg is thought to mean Glen of Ireland, linking it with the Irish who settled in Lochalsh  as many centuries later their descendants would borrow the name for their new homes in the USA (Maryland), Canada (Nova Scotia), and Australia (Victoria and Western Australia), all of which have Glenelgs.
Inverness
Did you know that the first British cabinet meeting held outside London took place in Inverness? In early September 1921 Lloyd-George was on holiday in Gairloch on the opposite coast when events in Ireland  and specifically a letter from de Valera  necessitated an emergency cabinet discussion, held on September 7 1921 at the Town House on Invernesss Castle Street.
John O Groats
Did you know that one of the most Scottish of places, John OGroats, is named after a 16th century Dutch immigrant called Jan de Groot? His fame came from his clever way of solving a family argument about precedence. His seven progeny arguing among themselves, he built an octagonal house with a door to each side; and within had an octagonal table  the Arthurian solution with a geometric Dutch twist.
Kilchoan
Did you know that the most westerly spot on the British mainland is Corrachadh Mor, near Kilchoan in the Highlands? It is more than 20 miles further to the west than Lands End, but only about 35 yards further than Ardnamurchan Point a mile to the north, that latter place often credited with the honour of being our islands western extremity.
Tain
Did you know that Tain in the Highlands is Scotlands oldest Royal Burgh with a charter dating from 1066? The charter was given by Malcolm III in recognition of the shrine there to St Duthac, allowing its church the right to grant sanctuary and giving its people exemption from certain taxes. Robert the Bruce sent his family to seek sanctuary there in 1306, but the English ignored the ruling and captured them.
Thurso
Did you know that Thurso, 154 miles north of Inverness , has the most northerly train station in the UK? Unsurprisingly the route it stands on is The Far North Line. Princes Street Station was built in 1911. It is also unusual for having as many cycle racks  three  as car parking spaces.
Wick
Did you know that the smallest street in the world  Ebenezer Place - is to be found in Wick in the North of Scotland? Its length is a mere 6 9, with just one narrow building fronting it. And it is not something knocked up recently as a record breaker  the local council first recognized it as a street in 1886.