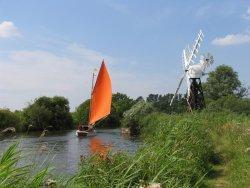 It is ironic that one of the greatest areas of natural beauty and wildlife conservation in Britain is in essence man-made. Located in the quadrant to the north and east of Norwich , the Broads are the shallow lakes formed when ancient peat-diggings were flooded because of a rise in water levels in the thirteenth and fourteenth centuries.

There are 41 Broads and meres, linked by six tidal rivers of generally gentle flow: the Bure, Chet, Ant, Thurne, Yare, and Waveney. In all the Broads offer more than 120 miles of lock-free boating, and nearly 190 square miles of wetland. The Broads Authority claims more than two million visitors to the area every year, with diverse activities to entice them there.

The principal lure of the Broads is boating . In times past they were important commercial waterways, and there are several restored Norfolk wherries sailing the Broads still, the most celebrated being the Norfolk Wherry Trusts Albion moored near Ludham.

In the later Victorian era pleasure boating became the most important water-borne activity on the Broads, and these days there are thousands of pleasure craft on the system. Most are motor-cruisers, but there are plenty of sail-boats taking advantage of the areas inland sailing opportunities. For the less adventurous there are short pleasure cruises available from Great Yarmouth , Wroxham (known as the unofficial capital of the Broads), and Potter Heigham.

The Broads are a nationally protected wetland area, and are a big draw for bird-watchers. The work of the Norfolk Wildlife Trust and others has seen a regrowth in the numbers of some of the most characteristic birds of the habitat, bitterns and marsh harriers, and rarities such a Cetts warbler being seen. The Trusts information centre and bird-watching gallery at Ranworth Broad are well worth a detour, as is the National Nature Reserve at Hickling, the largest Broad, where the lucky will see the rare Swallowtail butterfly. The Broads also offer good fishing in the autumn and winter when things are quieter, with big chubb and a great many pike of particular note.

There is a surprising variety of habitats and a great many interesting buildings to be found in such a small area. Between Yarmouth and Acle there is Halvergate Marsh, a stark landscape that abuts drained marshland used for grazing. The Broads are often bordered by huge reed beds, still cut in the winter for thatching. And there are islands of Carr woodland dotted all over, damp, shady and tangled, another haven for birdlife like willow-tits and treecreepers.

Thatched cottages and medieval churches abound, but the most characteristic architecture is the windmill. Three of special note are the Berney Arms Windmill , all seven stories of it, only reachable by boat and train; the drainage mill at Horsey mere, when open the view from the top repaying those with the courage to climb its four storeys; and Thurne Dyke mill, where there is an exhibition of the history of Norfolks windmills.