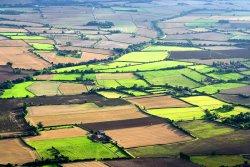 Eastwood
Did you know that D H Lawrence , born in the Nottinghamshire pit village of Eastwood in a small terraced house (8a Victoria Street), could not have been more wrong with his famous last words? They were: "I am getting better". His death came in Vence, France, where he succumbed to TB aged just 44.
Laxton
Did you know that Laxton in Nottinghamshire, by quirks of history, still operates a medieval strip-farming system? Its three great fields, West-, South- and Mill-, are overseen by a Manor Court, and farmers assigned strips by a foreman and jurors of the court. Because of this almost unique survival it also operates a three-field rotation, with one left fallow every year.
Nottingham
Did you know that the screen room on Broad Street is, with 22 seats, the smallest public cinema in the world
Did you know that Notts County FC is the worlds oldest professional football league club? The club was formed in 1862, though in those early days it was amateur. Greatest day for the original Magpies was surely their FA Cup Final win (at Goodison Park) in 1894.
Did you know that Nottingham is the birthplace of both Boots the Chemists and Raleigh Cycles? And that HP sauce was invented here by grocer F.C. Garton? Boots is even older than County, as John Boot set up the business in 1849. Raleigh is a relative youngster, formed in 1887. And HP Sauce a mere stripling, the name registered in 1895 (HP denoting Houses of Parliament where Garton heard his delicacy was served).
Southwell
Did you know Bramley apples were first produced here in Southwell - from a tree in the house of a Mr Bramley? Bramley was a butcher who bought a house there in 1846, its garden containing a tree grown by previous occupant Mary Brailsford. A nurseryman called Merryweather commercialised the variety from that single tree, naming it Bramley at the butchers insistence. Justice would have us call it the Brailsford.