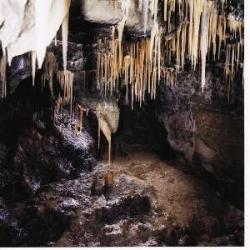 The Blue John Cavern is a show cave, one of four found at Hope Valley , Castleton, Derbyshire. Unusually for a show cave, the cavern is also a working mine. During winter time the cavern is worked for the semi-precious mineral known as 'Blue John' or 'Derbyshire Spar'. The miners who work the seams during winter then lay down their shovels in summer and become guides for the many visitors who tour the caverns.

It is believed by some that the Romans worked the caverns for Blue John and there have even been stories of vases made of Castleton Blue John having been discovered at Pompeii. However, there is no substance to these rumours. What is certain is that the stone here has been mined for over 300 years and is still very popular, and quite valuable. Indeed the stone, or more accurately ornaments carved from it, was in such demand in the 18th century that Matthew Boulton, who used the stone to make ornaments at his works in Birmingham , tried to lease the entire output of the mine in around 1765.

The Cavern tours given by the guides are of designed to be of immense educational interest. The Cavern properly illuminated by electric lighting giving the visitor a great view. The guides explain how the caverns were formed in limestone strata. In fact the limestone itself had been laid down even earlier by the deposits on the floors of great oceans which have long since receded. Fossilised remains of marine animals illustrate this fact clearly. A craft shop at the caverns is stocked with a wide variety of Blue John Jewellery set in silver and gold, alongside Blue John Ornaments such as bowls, eggs, and goblets. Refreshments and toilets are also available there.

It has been suggested that the Blue John Cavern is the finest show cave open to the general public in all of Western Europe. It was featured on the 2005 TV programme Seven Natural Wonders as one of the wonders of the Midlands.

The Blue John stone itself is a blue/purple and white/yellow banded variety of fluorite. It is supposedly only found in this cave and the nearby Treak Cliff Cavern . However, blue fluorite actually occurs widely throughout Derbyshire and especially in the Ashover and Crich areas. What's more, similar banded blue and white/yellow fluorite is now being imported into the UK from China, often to be passed off as coming from Castleton . The earliest dated decorative application of Blue John is its use in marble fireplace panels designed by Robert Adam and installed in Kedleston Hall near Derby in 1762.