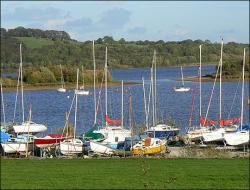 Carsington Water is a large reservoir, Englands ninth largest by capacity, situated in Derbyshire. Although the first plans to create the reservoir were laid down during the 1960s the actual construction didnt begin until much later in 1979. The reservoir was only completed in 1992 after the dam built to contain the water partially collapsed in 1984 and had to be removed. The dams reconstruction didnt start until 1989 and the finished project was finally opened by Queen Elizabeth II in 1992. Stone from local quarries was used in much of the construction work.

During construction care was taken in an attempt to minimise the impact of the reservoir on the local environment and wildlife. Around half a million shrubs and trees were planted there and these have now matured to provide a significant habitat for wildlife. There is a conservation area and bird hides on the banks of the reservoir. Carsington Water is also a very popular destination for a variety of sports and activities including watersports, cycling and walking. A visitors centre , a watersports centre and a wildlife centre have all been established there.

During the winter season water is pumped into Carsington Water from the River Derwent at Ambergate via a system of tunnels and an aqueduct. In summer the reservoir is allowed to drain back into the Derwent where it is subsequently abstracted and treated for commercial and residential use.