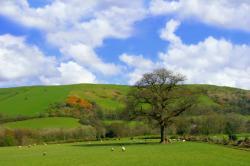 The Hope Valley is a valley in the Derbyshire Peak District that lends its name to an area centred on the village of Hope . Mam Tor, also known as the 'Shivering Mountain,' sits at the head of the valley at Castleton . An ancient Iron Age fort is still visible on top of the hill. The valley is reached from the west via Winnats Pass which winds its way through limestone crags. The rock formations along this route are honeycombed with potholes and abandoned lead mines. The area is a source of the unique Blue John stone which is turned into jewellery in Castleton's craft shops . The Norman keep of Peveril Castle is perched nearby, clinging halfway up a cliff. The fort was built in 1088 by William the Conquerer s illegitimate son William Peveril. The valley hosts three main rivers; Peak Water, the River Noe and the River Derwent. These all help feed a number of large reservoirs in the valley, include Ladybower Reservoir. As well as a valuable source of water, the reservoirs are also an important recreational facility in Hope Valley. In the north of the valley a trail runs from Mam Tor to Losehill. The path takes the line of the ridge that divides the Hope and Edale valleys and gives walkers spectacular views across the valleys it divides.