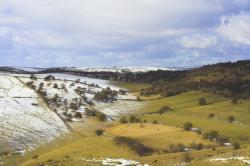 The Derbyshire Dales is a local government district of Derbyshire that has its centre at Matlock . The area is well known for its magnificent scenery and charming towns and villages. Large areas of the district lie inside the Peak District, although this is the sparsely populated part of the Dales. Most of the settlements are along the River Derwent which flows through the district. The Peak District is home to Britains first National Park.

Although the wonderful Pennine scenery is itself enough of a draw, visitors flock to the Derbyshire Dales towns such as Matlock Bath. This delightful spa town was no more than a small rural village until 1698 when warm springs were discovered and a bath house built there. Since then it has grown to become a major tourist resort, almost like a quintessential English seaside town but in the heart of the countryside. The town became a society venue during the reign of Queen Victoria , and much of that elegant and fashionable past is still evident today. It is also a major venue for motorcyclists, who have been congregating in the spa town for as long as anyone can remember.

There are many attractions for the visitor to Matlock Bath , including the famous Heights of Abraham . This is a self contained park on top of the hill also known as the Heights of Abraha. The attraction contains a former mine and the workings there are open to the public. The River Derwent has cut a deep channel that passes through Matlock Bath. Theres a promenade along its bank that reinforces the seaside association. On the opposite bank to the Heights of Abraham is High Tor. This sheer cliff attracts many climbers and walkers, a narrow winding path called Giddy Edge runs along the cliff edge here. Cable cars leave from close to the base of High Tor heading for the Heights of Abraham. Other Matlock Bath attractions include Gulliver's Kingdom theme park, the Peak District Mining Museum , the Life in a Lens Museum of Photography & Old Times, a petrifying well and an aquarium .

As if one spa town wasnt enough for one relatively small area, the Derbyshire Dales also has Bakewell . This small market town is the only town within the Peak District National Park and lies along the banks of the River Wye. A chalybeate spring was discovered at Bakewell in 1697 which led to the construction of a bath house there. During the 18th century attempts were made to develop Bakewell as a spa town to rival others, such as Buxton in neighbouring High Peak district.