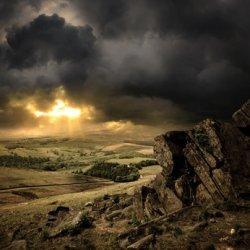 Probably the most fun way to explore the Peak District is by the 58 bus from Macclesfield (known as the gateway to the Peak District) to the 1000 ft above sea level spa town of Buxton , then on to the pretty stone built village of Bakewell . A bus ride along the Cat and Fiddle pass best illustrates the contrast between the rolling orchards of the lower hills and the bleak heather covered Pennine mountains and peat-bogged moorland of the higher peaks along one of the most dangerous roads in England.

The bus will stop at request at the Cat and Fiddle pub, which, at the top of a 1700 feet mountain on the Cheshire / Derbyshire border, is the second highest pub in Britain. Every few months it is possible to book helicopter rides over the mountains surrounding the pub. From here it is possible to walk for hours in total solitude except for sheep, hawks, hares and the occasional paraglider. But beware of moorland fires in Summer and quick heavy snowstorms in Winter. For light snacks and delicious homemade cakes check out the tea rooms (on the left before the pub on the bus) with its views over the aptly named peak, Tegg's nose, and the medieval Macclesfield Forest.

Having splashed my way across Wessenden Moor via the paving slabs and wooden slats of the Pennine Way , I have to advise only exploring the northern tors of the Peak District in a drought. For experienced walkers, a good circular route starts from the car park at Wessenden Head lake on the Marsden Moor Estate , the most northern part of the Peak District between Manchester and Huddersfield . There a boggy footpath leads to Butterley Reservoir past its extraordinary water steps and lakes to the 1600 ft high tor of Black Hill, then follow the Pennine Way back to the carpark. This famous 250 mile long footpath starts in Edale in the south of the Peak District and goes past Kinder Scout, the National Park's highest peak, with it's surprisingly bizarre summit landscape northerly through the Pennines (often referred to the backbone of England) all the way to Scotland.

Other Peak District attractions include the stately home Chatsworth House , a network of large caves at Castleton , remains of a Roman settlement in Hope Valley and stone circles including the bronze age barrow and stone circle Arbor Low , also known as the Stonehenge of the north.