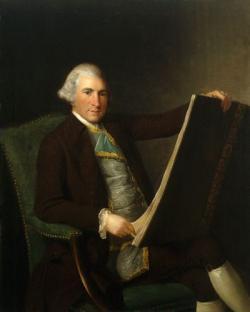 Robert Adam was born 3rd July 1728 and died 3rd March 1792. He was a Scottish neoclassical architect, interior designer and furniture designer. He was born in Kirkcaldy, Fife, later moving with his family to Edinburgh where he attended Edinburgh High School and Edinburgh University. He was apprentice to his father, William Adam, Scotland's foremost architect of the time. Robert's early ambition was to be an artist rather than an architect, but he took over the family business after his father's death with his brother John where their commissions included the decoration of the state apartments at Hopetoun House, as well as Dumfries House. In 1754 he set off on the Grand Tour of France and Italy and studied architecture under Charles-Louis Clerisseau and Giovanni Battista Piranesi. On returning to Britain he opened a practice in London with his brother James and developed the "Adam Style", incorporating elements of classical Roman design alongside influences from Greek, Byzantine and Baroque styles. The brothers focused on designing complete schemes for the decoration and furnishing of houses, down to the last detail. He was one of the most successful architects of his day and held the position of Architect of the Kings Works from 1761 to 1769. His work influenced the development of Western architecture in Europe and North America, and he led the first phase of a classical revival in Britain. His rival was Sir William Chambers, the leading official British architect of the era, but Adam is said to have a more lasting stylistic influence. His projects include Harewood House in Yorkshire, Kenwood House in Hampstead, Kedleston Hall near Derby, Luton Hoo in Bedfordshire, Mistley Towers in Essex, Pulteney Bridge in Bath and Osterley Park in West London. He was elected a member of the Royal Society of Arts in 1758. He died suddenly at his home in London, and was buried in Westminster Abbey. He left some 9,000 drawings, most of which are now at the Soane Museum in London.

Contributors: Do you have a site related to Robert Adam?
Supply some content for this page and we will gladly add a link to your site. Email here.