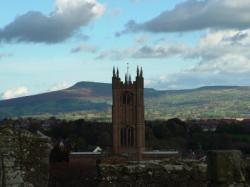 The hills are bisected by the B4364 road, which offers good views of both the hills as it runs between them. They are sometimes referred to as the gateway to the West Midland area, as they mark where the rural landscape of Welsh Marches begins to give way to the industrial landscape of the West Midlands. Both hills have been extensively quarried for the local igneous rock, called dolerite and also for iron, copper and limestone. The pair each have radar and air traffic control masts on them. They can be seen from miles around both during the day and at night, even from on the M5 motorway!

The hills themselves also offer wonderful views. Looking west you can see as far as Snowdonia and Cadair Idris. If visibility is good you can gaze upon the Brecon Beacons , the Black Mountains , the Long Mynd, as well as Stiperstones (Shropshire's third highest peak), Corndon Hill and Radnor Forest. To the south lay the Malvern Hills and the Cotswolds and to the east the Clent Hills, Turner's Hill and the spread of the West Midlands. To the north is Cannock Chase and in exceptional visibility the hills of the Peak District including the Roaches and Winter Hill can be seen.

The village of Cleehill lies between Ludlow and Cleobury Mortimer and lies and on the slopes of Titterstone Clee Hill. The hills offer an important habitat for wildlife, there are many rare or threatened breeds sheltering there. It is a known habitat for the peregrine, kestrel, skylark, European stonechat, northern wheatear, Eurasian curlew and the barn owl. On the ground adders and rabbits are common. Ravens have also been making a comeback on Clee Hill.

The Clee Hills provides an irresistible challenge not only to walkers, who wish to scale the hills to take in the superb views from the summits, but also from the competitors in the annual Clee Hill Classic Trial. The event attracts plucky drivers of vintage and classic cars who try to scale the hills via a selection of extremely arduous and very muddy tracks