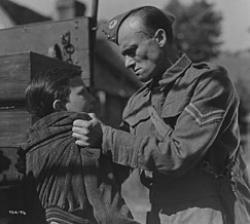 Asked about WWII propaganda films we tend to cite the stiff-upper lip and warmly British stuff like Mrs Miniver, In Which We Serve , or The Life and Death of Colonel Blimp, but not the more shocking Went the Day Well, which is a pity as it is daringly different.
The tale (loosely based on a Graham Greene short story) of a quiet English village infiltrated by German soldiers pre-invasion manages to shock on several levels: the ruthless actions of the Nazis in wiping out a Home Guard unit; the squire turning out to be a fifth-columnist (doubly surprising as the role was played by heroic hunk Leslie Banks); the vicar becoming a victim; a woman bayoneted; and the village women (including Thora Hird in her first big role) being involved in the fight back with weapons ranging from axe to rifle. Some critics reasonably compare the film with the horror genre, its composition similar: the action builds slowly; tension is increased with cruelly black humour, the whole supported by William Walton s dramatic score; the action is claustrophobically confined to the village (in real-life Turville in Oxfordshire ); and the violence though not bucket-of-blood stuff is strong, with a neatly moral conclusion.
By the time the film was released the German invasion threat had greatly reduced; but the Michael Balcon produced piece makes it easy to empathise with 1942 audiences still wondering how the war would conclude; and scared for themselves and their families.