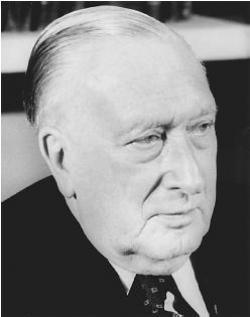 The career of composer William Walton followed the winding path from enfant terrible to leading light to yesterdays hero and finally grand old man. His orchestral music features widely still in the concert repertoire; his film music is revered; his choral work Balshazzars Feast is regarded as a standard.
Walton was born in Oldham on March 29 1902, his father a choirmaster there. Aged 10 William joined Oxfords Christ Church Cathedral choir, and became a Christ Church undergraduate when just 16, leaving without a degree having spent most of his time studying scores by modern composers rather than on coursework.
His friendship with Sacheverell Sitwell saw him move in with the family from 1920 to the mid-1930s when they fell out about his affair with Lady Wimborne. The Sitwells introduced Walton to leading figures in contemporary music and arts: Rex Whistler; Peter Warlock; Constant Lambert; Ezra Pound; Noel Coward; T.S. Eliot; Lytton Strachey and many others.
Waltons Facade, composed in 1923, was a success de scandale, making his name; in 1927 his Sinfonia Concertante again much acclaimed, a status enhanced by his melancholy Viola Concerto two years later. Much of his music was premiered, or at least promoted, by the International Society for Contemporary Music. Perhaps Waltons most ground-breaking piece was his 1931 Balshazzars Feast, though success with the wider populace came with his 1937 coronation piece Crown Imperial.
Walton befriended the younger Benjamin Britten, a composer soon to eclipse him, though their lives remained linked: Waltons song cycle Anon. in Love was premiered in 1960 by Peter Pears, Brittens partner; in 1967 The Bear, Waltons one-act opera, premiered at Aldeburgh; and in 1969 Walton composed his Improvisations on an Impromptu of Benjamin Britten. After WWII Waltons star fell  his opera Troilus and Cressida on which he laboured for eight years seemed in 1954 old-fashioned contrasted with Brittens work.
During WWII the drafted Walton was put to work composing for patriotic films such as Oliviers Henry V, and The First of the Few, a medium he returned to  not without problems  in his contribution to the 1969 film Battle of Britain. He was knighted in 1951.
In his declining years the disdain of critics turned to appreciation, though sadly he struggled to compose much of great value, his eyesight and general health failing gradually. He died at his home on the island of Ischia on March 8 1983.

Contributors: Do you have a site related to William Walton?
Supply some content for this page and we will gladly add a link to your site. Email here.