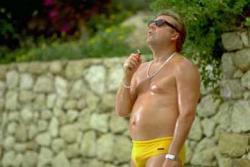 A leading contender for swearingest British film of all time, Sexy Beast is a film that is hard to define and all the better for it. Part heist  the method used to carry out the robbery is ingenious  part gangster movie, part tragi-comedy, it is sharp, violent, amoral and (indispensible word) gritty, an amazing directorial debut for Jonathan Glazer.
Ben Kingsley may pick up cheques for strolling through Thunderbirds, but when given roles like Logan he is a truly great actor, making his deranged character genuinely scary and justly earning an Oscar nomination for his portrayal. Ray Winstone provides a nice foil with a calmer, stiller performance though edged with darkness, and completing a trio of top class hard men Ian McShane gives his psychopathic gang chief Teddy Bass charm and intelligence along with buckets of menace. The cast also contains Amanda Redman getting her teeth joyfully into a demanding role, and James Fox suitably classy as the banker Harry.
Not a film to watch with granny or the kids unless youre an East End gangster, but a rare treat as something different, daring and shocking without the need for gallons of blood  a pint or so suffices. The language is legendarily foul, but not a word is gratuitous.