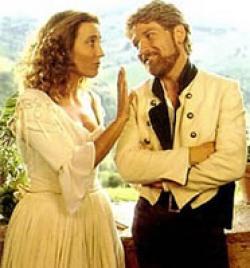 Much Ado about Nothing

Kenneth Branagh with his 1993 adaptation of Much Ado About Nothing succeeded in making perhaps the most boisterous and entertaining cinema version ever of a Shakespeare play. The screen Messina is all sunshine, clean white stone and green open spaces; and his cast (perhaps with the exception of Keanu Reeves) seems to relish the quick-fire word play and almost choreographed motion, Emma Thompson dazzling as Beatrice, Michael Keaton and Ben Elton a wonderfully comic coupling as Dogberry and Verges.
Though at the time casting Denzel Washington as Don Pedro was seen as a little daring such is Washingtons combination of charm and depth that the audience soon forgets the historical incongruity of a black man playing the Prince of Aragon. Not so comprehensible is the casting of Reeves, out-baddied and out-acted by Gerard Horan as Borachio.
Stalwarts of British character acting Brian Blessed , Richard Briers and Phyllida Law fit their roles like comfy old jumpers; and Harry Potter fans seeing the film could find themselves confused by the sexiness of Imelda Staunton known to them now as Dolores Umbridge, her naughtily buxom Margaret a nice contrast to Kate Beckinsale s innocent Hero.
Kenneth Branagh s direction is full of intelligent movement, shots following plotting actors down dark cellars, dancing through the masque, rising high in the joyous finale. This is the film any child about to study Shakespeare should watch: funny; menacing; ridiculous; sexy; violent; poetic and in the end just hugely enjoyable.