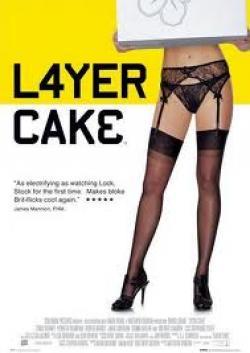 Matthew Vaughns 2004 directorial debut Layer Cake gives more than a nod to 1970s heist movies, adding a contemporary edge of nastiness and throwing in moments of absurd humour . What could have been messy in fact comes together in  as the title suggests  neat layers: of plot; of characters from different social levels; and of differing moralities.
But above all the movie is a gangster thriller that goes at a cracking pace: pre-Bond Daniel Craig excels as the central and unnamed character torn by residual guilt, a desire to get out of his drug-dealing world before it kills him, and undoubted fear. Kenneth Cranham and Michael Gambon give good menace; Colm Meaney and George Harris provide a different type of threat, and some of the underlying humour; and Sienna Miller provides the love interest at the heart of Craigs wish to quit the underworld.
The plot is suitably convoluted, with plenty of twists and gunplay; and the end is genuinely surprising  though in true dont-forget-the-sequel fashion it is not fully resolved. By 2030 Layer Cake will be as well regarded as Get Carter is now, with Craigs performance, albeit very different, bearing comparison with Michael Caines in that classic movie.