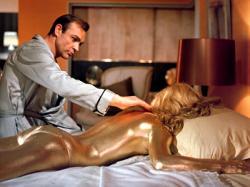 Goldfinger! [dahh dah dah dah dahhh] Hes the man, the man with a heart of gold... Shirley Bassey belting out the words written by Anthony Newley and Leslie Bricusse, with music by the great John Barry , starts the film with the power and pace it sustains till the end. This is the apogee of the Bond franchise: Connery at his coolest walking like a panther; top-notch evil genius, played by Gert Frobe; and just the best henchman  Oddjob played by Olympic weightlifter Harold Sakata; best-named love interest in Pussy Galore (Honor Blackman). For many, however, the real star was the silver Aston Martin DB5, a car that spoke volumes about Britain in 1964: innovative, sexy, and costing its makers money with every model sold. But surely one day those gadgets must feature on options lists? Throw into the mix the clever/ridiculous death of character Jill Masterson, suffocated in gold paint; blend that with sparkling Bond/baddie dialogue: Do you expect me to talk? (Bond about to be lasered in half) No Mr Bond, I expect you to die, and you have a sexy, fast, witty, beautifully edited film. And with Bond made vulnerable by director Guy Hamilton  Oddjob beats him up twice - the tension is far greater than in previous outings. Editor Peter Hunt restricted the action to 110 snappy minutes: contemporary film-makers would probably require a bowel-troubling 150, the directors cut a self-indulgent 15 longer. Goldfinger is made for the audience, and still works.