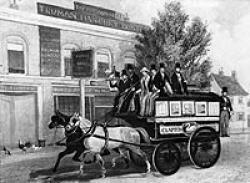 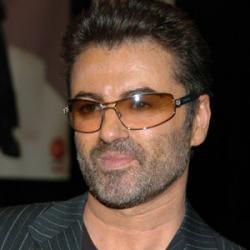 There are some claims that what amounted to a bus service was run in Paris before the one in London began, but information is sketchy. Another service, in the Nantes area of France, certainly did run in the early 1820s, and there were services in Glasgow and Manchester , but all were rather closer to stage coach services than what we would understand as a bus service. Interestingly, the man who designed the Omnibus, George Shillibeer, worked in Paris designing large horse drawn vehicles before returning to his home city to make his fortune.
The two vehicles Shillibeer made for his London service were very stable, described as being van-like, with windows each side and at the rear.
Shillibeers service ran from The Yorkshire Stingo in Paddington to the Bank of England via New Road, Somers Road, and City Road. There were 22 seats in the wagon drawn by three bay horses in line abreast. Shillibeer advertised his service as being in the Parisian mode, but in case the racy image of the French capital might put people off, he staffed it with ex-navy personnel and stressed their respectability. His omnibuses were certainly economically attractive, the fare of just one shilling being a fraction of the equivalent stagecoach. As he ran four services a day, and unlike the stagecoach competition there was no need to pre-book, it quickly became popular, with takings of £100 a week.