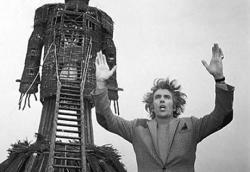 The 1973 film Wicker Man always features amongst the greatest in most lists of top British movies whether compiled by fans or critics. Quite why is hard to say.
Look at the constituent elements. The storyline of pagan survival/revival and threatened sacrifice is briefly interesting, but repetition renders it toothache-annoying. The cod folk music, meant to add atmosphere, leaves those of a certain age thinking strangely of both Play Away and The Two Ronnies  the musical exception being the ancient Sumer is Icumen in during the only real dramatic highlight, i.e. the finale. And thriller it is not with the ending totally predictable - there are flagpoles with more twists. Edward Woodward has little to get his teeth into until the final minutes, when he can and does show his skill. As for the rest of the cast: the legendary Christopher Lee , escaping type-casting in the immeasurably superior Hammer Horror films where he excelled, plays a tall urbane man; Britt Ekland gets them out for the lads; and Ingrid Pitt has a bath, one of several supposedly erotic scenes arousing like porridge is.
Best thing about the film - the location shots, Dumfries and Galloway masquerading as Summerisle, with Skye providing some additional sequences early on.