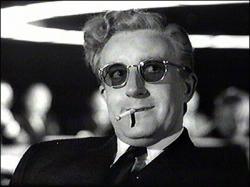 Has there ever been a comedy where it is harder to laugh? And not because of the performances, which are sometimes brilliant; nor the situation, which is truly absurd. Outweighing the humour is the realisation that something like this could happen: one lunatic sparking nuclear annihilation. During Dr Strangelove we laugh weakly and feel threatened strongly. Yet the movie is packed with comedic moments ranging from philosophical to scatological. Peter Sellers has three roles to demonstrate his genius: inadvertently giving Nazi salutes as Dr Strangelove; dithering and lost as Mandrake; and humorously straight as the President. Sellers supposedly improvised much of his dialogue with the agreement of director Stanley Kubrick. Filmed in Shepperton Studios using sets that increase the feeling of paranoid claustrophobia Dr Strangelove was belatedly released in 1964 because of fears it might be taken as insulting to the memory of recently assassinated JFK. That concern regarding the films connection to the real world is valid: how many of us watching American politicians and strategists over the years have experienced flashbacks to George C. Scotts General Turgidson; Sterling Haydens Jack D. Ripper; and the logically lunatic Strangelove himself? Dr Strangelove is of its time but still valid now. But in its day it lost out in the Oscars to My Fair Lady and Mary Poppins, which says much about how scary the times were and our consequent need for comfort.