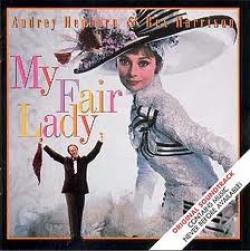 Though it was filmed in beautiful downtown Burbank, and its director, producer, composer and lyricist were all American, My Fair Lady qualifies as British because its major actors were, and because of the London -based story taken from George Bernard Shaw s Pygmalion.
Already a huge hit on Broadway and in the West End My Fair Lady was not a major gamble for the production company Warner Brothers. The songs by Lerner and Loewe include classics like I Could Have Danced All Night and Get Me to the Church on Time; the art direction (for which Cecil Beaton shared an Oscar) plays painterly tricks to superb effect; and the costumes (which Beaton had to himself) are often art in themselves.
Stanley Holloway received a best supporting-actor Oscar for his performance, Rex Harrison taking the best actor version in spite of his dreaded talk-singing. The trio of roués was completed by the very imitable Wilfrid Hyde-White , unlikely ever to win such gongs given his technique of playing the same character whatever the role, albeit that character was never less than charming. A 30-year-old Jeremy Brett more remembered for his later Sherlock Holmes played Freddy superbly, though strangely like lead-actress Audrey Hepburn his singing was dubbed  his voice was certainly good enough to have been kept in.
For some reason a remake has been mooted; why bother when the original was as close to romantic musical perfection as makes no difference?