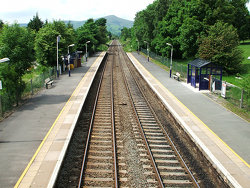 Britain gave birth to the Railway Age, and in the 19th century developed a network the bones of which still exist. Though we British love to moan about our trains they generally provide a good, comfortable and quick service, and with a bit of preparation an economic one.

The car may be easy for short journeys, and 'planes attractive for long ones, but within Britain you really should consider the train. In comfy seats you can watch the scenery, read, sip a coffee and even sleep. Train stations tend to be in city and town centres, so you arrive near the attractions and accommodation there, or within a short taxi ride of them which is not the case with most airports. In village halts you may even be within yards of the village inn. And of course it is a green choice. If you want to drive at the end of your train journey it's easy to arrange a hire car to be collected at most stations.

Thanks to the Channel Tunnel there is now the option of entering or leaving Britain by train, and a very modern train at that. Eurostar connects London St Pancras with Paris Gare du Nord, and also with Brussels, the London-Paris trip taking about 150 minutes.

From London's termini the entire British mainland network can be easily accessed, stretching from Penzance in the extreme south west to Thurso at the top of Scotland, from Holyhead at the western edge of Wales to Lowestoft on England's east coast.

A train ride need not only be a method of getting from A to B; it can be a part of the experience to be enjoyed in itself. Whole books have been written about the great little train journeys of Britain.

Take for example the 72 mile run between Settle in North Yorkshire and Carlisle near the English-Scottish border, that passes through stunning countryside not easy to access by car, crossing the giant Ribblehead Viaduct, and rushing through the Eden Valley and Dentdale.

At the other end of England Isambard Kingdom Brunel's South Devon Railway offers a beautiful stretch from Exeter to Newton Abbot, skirting the sea between Teignmouth and Dawlish. Or traverse the rugged Scottish Highlands from Perth to Inverness and on to the Kyle of Lochalsh facing Skye. There are less heralded areas too of surprising beauty: from Arnside on Cumbria's border with Lancashire the line to Ulverston gives travellers views of Morecambe Bay no car can equal, passing over viaducts and along the salt marshes.

Another way to make rail travel an unforgettable experience is using sleeper services. There is something indefinably elegant about sleeper trains: going to bed in London, lulled by the rhythm of the coach wheels as you leave Euston, and waking up in Edinburgh, Inverness or Fort William. You can of course join or leave the trains at other points along the way - Watford, Crewe, Preston, Aberdeen, Aviemore, Glasgow... And at the opposite end of the land travel between Penzance in Cornwall and London Paddington.

The short-sighted cuts of the dreaded Dr Beeching severed many branch lines and closed stations 40 years and more ago, but dedicated volunteers and commercial organisations have ever since then reopened dozens of them as preserved railways, some linked to the national network, some islands of activity; others have never been part of the bigger system, serving local business or tourist needs. They tend to be away from the main population centres, and by their very nature often run through lovely countryside: the Embsay and Bolton Abbey Railway takes you through magnificent Dales scenery; Brecon Mountain Railway offers a route in Welsh hill country somewhat easier than hiking it; the Romney, Hythe and Dymchurch narrow-gauge railway on the West Kent and East Sussex coast opens up the strange beauty of Dungeness Sands to visitors, passing Martello towers along the way.

There are then huge benefits from taking the train; but if you want to make the most of the trip for the least cost, it takes planning: Information Britain offers ten tips to help you: