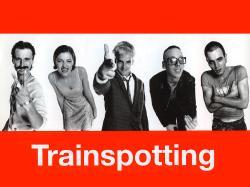 Trainspotting is unlikely ever to feature in BBC1s Christmas afternoon schedule, and Trainspotting the musical would be a bit of a stretch. A grim Irvine Welsh tale of heroin addiction, lost lives and violence, it nevertheless manages a few laughs, though most of the oh no variety. But with the death of a baby, another of one of the characters originally with hope for life but dying from HIV-related causes, and the horrors of cold turkey, it is not an easy watch. The film ensured the star status of both Ewan McGregor and Robert Carlyle , the parts they play giving them the chance for some serious actor acting. It didnt harm the reputation of director Danny Boyle either, who not only packed the action into barely more than 90 minutes, but also made brilliant use of Edinburgh and London locations. And lack of finance supposedly meant many shots were one-take deals, the desperate lives of the characters mirrored in a small way by the stress of the cast. As with so many contemporary movies the accompanying music provides another important layer to the thing: Eno, Damon Albarn , Pulp, Blur, Sleeper and many others adding to the feel created by Boyle.