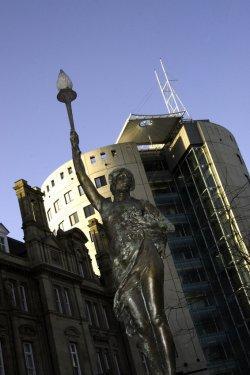 Did you know that worlds largest fish and chip shop is Harry Ramsdens near Leeds? The original Guiseley shop was a 10 foot by 6 foot shed, which he opened on December 20 1928 : it succeeded because it offered tasty and perfectly prepared food  isnt it about time certain fast food rivals followed suit? Link: straight from the horses mouth

Did you know that on October 14 1888 Louis le Prince recorded the very first moving images with a Leeds back garden as his subject? The French inventor made films of a Roundhay garden, and subsequently of a nearby bridge. They were shown to a limited viewership in Hunslet and Leeds. He disappeared mysteriously two years later, before he could establish his rightful position as the true pioneer of the moving picture.

Did you know that Middleton Colliery Railway on the outskirts of Leeds is the oldest continuously operated railway in the world? Its construction began in 1755. Originally it had wooden tracks on which horses hauled coal-wagons; but in the first decade of the 19th century it gained iron rails; and in 1812 began using steam locomotives. Another badge of honour for the system was that it was the first standard-gauge railway to be run by preservation volunteers.