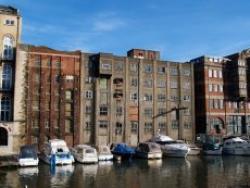 Bristol
Did you know that the Theatre Royal Bristol is the oldest continuously working theatre in Britain and has been staging productions since 1766? Part of the complex is actually older than that, Coopers Hall which was built in 1744 now incorporated into the theatre to provide the public entrance.
Did you know that the oldest dinosaur so far found in Britain, and one of the oldest discovered anywhere in the world, was unearthed in Bristol? Thecodontosaurus antiquus was not as terrifying as some of his descendents: about 2m from top to tail, it walked on two legs and was a plant eater. The first example was dug out of a quarry in Clifton in the city back in 1834, and was only the fifth type of dinosaur named.
Did you know that the worlds first commercially produced chocolate bar was made in Union Street Bristol by Frys in 1847? Fry's still make amongst other things Turkish Delight which was launched in 1914  their famous Chocolate Cream first saw the light of day in 1866.