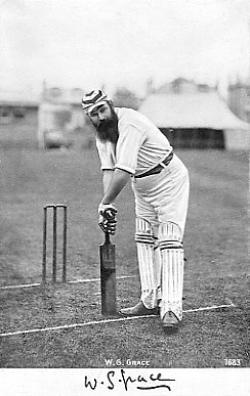 Probably the most famous face in the history of the game of Cricket, W G Grace ('Gilly' to those close to him) is credited with transforming the game of cricket within his long and distinguished playing career.

The familiar image of W G Grace is of a rather portly man with a long and bushy beard. However, it is less widely known that in his younger playing days he cut a much fitter and more muscular figure. Unfortunately, Grace loved his food and was known to enjoy a substantial lunch which often including a glass of whiskey! This accounts, perhaps, for the change in his shape to the more familiar figure we see in most photographs and is also believed to account for the number of times he gave up his wicket shortly after lunch!

W G Grace cut a formidable figure at 6ft 2in tall and was something of an accomplished athlete all round. Two days after scoring 224 not out for England in a game against Surrey; he competed in and won the 440 yard Hurdles in the National and Olympian Association meeting at Crystal Palace. Grace qualified as a Doctor in 1879 and opened a practice in Bristol but continued with his first class cricket career.

Grace played first class cricket for over forty years (1865-1908) and posted some fine figures during that time. Most of his career was spent with Gloucestershire. His batting average of just under 40 seems relatively modest but it should be remembered that this was lowered by the fact that he played for so long, he was still appearing on the green well into his declining years. In his prime his average was between 60 and 70. I should also be remembered that the pitches of the day were not prepared to anything like the standards of today, making batting a much more difficult task. He also was a fine bowler with 2,809 wickets for an incredibly low average of 18.14.

Contributors: Do you have a site related to W G Grace?
Supply some content for this page and we will gladly add a link to your site. Email here.