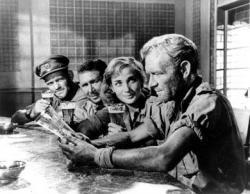 Vying for the crown of worlds sweatiest film with Cool Hand Luke, the 1958 war film Ice Cold in Alex creates a very intimate drama within the vast setting of the North African desert.
The plot concerns the perilous journey of an ambulance and its passengers from bombarded Tobruk to the safety of Alexandria. Made more than a decade after the end of WWII the film is able to examine the shared humanity of its protagonists, one of whom is a German infiltrator (played by Anthony Quayle ), rather than Nazi evil and British righteousness. Indeed the Captain played by John Mills is deeply flawed: a near drunk; at times indecisive; whereas the spy twice saves them all with his immense physical strength and endurance. Harry Andrews as the sergeant-major gives the sort of solid support that frames bigger names perfectly; and Sylvia Syms, perhaps because of her uniform and the demure nature of her role giving perhaps her sexiest performance, has rarely been better.
But what we all remember when the film is named is that wonderful moment when the barman pours a tall glass of foaming ice-cold lager (Carlsberg to be precise), and John Mills pauses before downing it. We taste it with him.
Top tip: if watching this at home, make sure you have some lager in the fridge beforehand; unless a teetotaller you will certainly fancy a cold one when the movie ends.