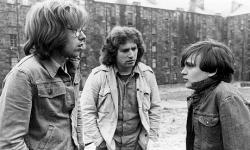 Bill Forsyths directorial debut, just like Gregorys Girl , Local Hero and Comfort and Joy that followed in his golden period in the 80s, captures the spirit of its locations, in this case Glaswegian. Bill Forsyth also wrote and produced the film, which was made on a tiny budget using actors largely from the Glasgow Youth Theatre, among them John Gordon Sinclair.
The movie follows a gang of gawky working class teenagers who seemingly live on cereal in a regularly rainy Glasgow . They determine to make some money in a heist  though their target is a consignment of stainless steel sinks. The scheme involves cross-dressing to much comic effect, but it is the charm of their naivety and hope that drives the piece along. The surprise ending is ahead of its time, a nice comment on the art world even more relevant now.
Forsyths dialogue is sharp and awkward at once, the teens finding humour wandering about in their often grim surroundings. When eventually released in America it was felt necessary to redub with posher accents: if buying the DVD, check it isnt that overdubbed version with incongruously middle class accents.