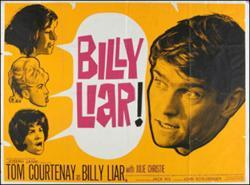 John Schlesingers 1963 working of Keith Waterhouse s novel is generally but unjustly grouped with the kitchen sink dramas of the same period. It has a gritty setting, using Bradford as Billys hometown, and the style of photography is similar, but Billy Liar, unlike say This Sporting Life or A Taste of Honey, is a bittersweet comedy, at times a farce, albeit eventually with more bitter than sweet about it.
Beneath the comedy there is sadness, and in the end anyone with a mind is forced to realise most of us are more Tom Courtenay s Billy stuck in Ambrosia, fantasists who will never attain fame, than his girlfriend Liz played by Julie Christie , who at the end is on the train to possibilities and opportunity while Billy engineers a return to mediocrity  or has circumstance force it upon him.
Courtenay gives a dominating performance in a career-making part, but the supporting cast which features Wilfred Pickles as his father, Helen Fraser as his sweeter fiancée, the great Rodney Bewes as his mate and Leonard Rossiter Billys annoying employer, frame his role perfectly.