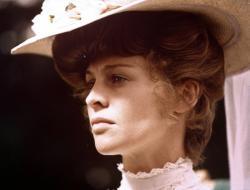 
Studied at Central School of Music and Drama. In 1965 won Academy Award for role in film Darling. Further success with Dr Zhivago (1965) and The Go-Between (1971). Commitment to a number of political causes curtailed her performances though returned in Dragonheart (1996) and Hamlet (1996). Awarded BAFTA felloswhip in 1997.

Contributors: Do you have a site related to Julie Christie?
Supply some content for this page and we will gladly add a link to your site. Email here.