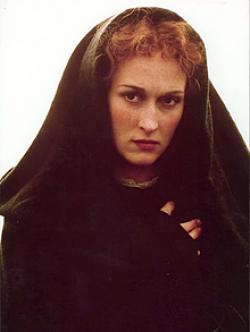 It is debatable whether the 1981 movie The French Lieutenants Woman is more Pinter than Fowles, Harold Pinter s clever adaptation of the novel by John Fowles veering away from the original to make a filmic treatment possible. What everyone remembers about the film is the dramatic shot of Meryl Streep as Sarah standing on the gale-lashed Cobb in Lyme Regis , her face framed by a hood as she turns to face Jeremy Irons /Charles. What is now more easily forgotten is the complex mixture of melodrama in a Victorian setting and contemporary love affair between two actors, the device Pinter employed in place of the continually present authorial voice of the novel. With the intertwined stories ending differently, and relentless time-shifting, however beautifully filmed  and it is  and however wonderful Carl Daviss score, there is something essentially theatrical about the movie. The French Lieutenants Woman remains an intriguing watch, and as so often with British films we can delight in the performances of the supporting cast, here including Leo McKern, Penelope Wilton, Alun Armstrong and Liz Smith. But somehow the whole manages to be less than the sum of its parts.