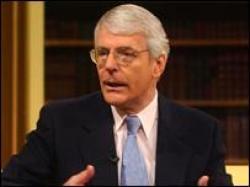 'Britain is the grit in the Eur'... More

Son of a trapeze performer. Became Conservative MP for Huntingdon in 1979. Made rapid progress from junior Minister to Foreign Secretary and then Chancellor of the Exchequer. Became Prime Minister in 1990 when Margaret Thatcher stood down. Resigned in 1997 with Labour landslide victory. Made Companion of Honour in 1999. Stood down as MP at 2001 general election.

Contributors: Do you have a site related to John Major?
Supply some content for this page and we will gladly add a link to your site. Email here.