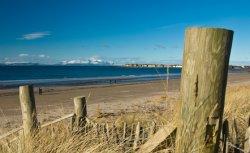 Ayr
Did you know that a side-road at Sauchie House (just outside Ayr) was the first in the world to be tarmacked? The house belonged to John Loudon McAdam , who purchased it having been forced out of America for his loyalist sympathies during the War of Independence . Back in his native Scotland he experimented with road construction, evolving a relatively cheap system of cambered layers of stones (large topped by small) which traffic itself compacted.
Irvine
Did you know that Edgar Allan Poe lived for a short time in Irvine in Ayrshire? His foster father John Allen was born there, and in 1815 the family crossed the Atlantic to begin a lengthy trip to Britain. For a time the 10 year old Poe studied at the Grammar School in Kirkgatehead, while living in a house at Bridgegate. He later also studied in Chelsea and Stoke Newington .
Largs
Did you know that the parish church in Fairlie near Largs is unique in possessing a weather vane shaped like a yacht? It was commissioned as a memorial by the family of local yacht designer William Fife, and represents what he thought the zenith of his career, the yawl Latifa. Fairlie is still involved in yacht-building and restoration.
Mauchline
Did you know that Mauchline in Ayrshire has the only curling stone factory in Britain? Andrew Kay & Co and their forerunners in the town have made curling stones there since 1851. The company is located at the somehow apposite Barskimming Road in the town. The stone used is granite from Ailsa Craig, exclusive to Kays.
Maybole
Did you know that Culzean Castle was made Scotlands first countryside park in 1969? The 18th century castle near Maybole has another unique claim-to-fame: in 1945 as a gesture of thanks for Americas decisive part in WWII a so-called National Guest Flat there was given to General Eisenhower to use for the rest of his life. Were not talking studio flat either: there are six double bedrooms and large dining and drawing rooms.
Prestwick
Did you know that Prestwick Airport is the only bit of Britain that Elvis actually set foot on? On March 3 1960 the plane returning him to the USA from his military service in Germany stopped there to refuel. Elvis was greeted by 1000 fans, some of whom got autographs from The King, who spoke about tour plans that included Scotland  but he never made it back.