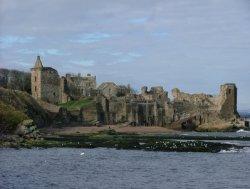 Crail
Did you know that in medieval times Crail in Fife was so important to the Scottish fishing industry that in 1310 Robert the Bruce granted it the rare right to hold a Sunday market? There is evidence that the port exported fish as early as the 9th century, and some fishing continues today. John Knox later preached a powerful sermon against the Sunday market in the towns church.
Dunfermline
Did you know that the first Carnegie Library was opened in Dunfermline in August 1883? Millionaire-philanthropist Andre Carnegie emigrated to the USA from that town as a child. His foundation went on to fund 2509 libraries around the world, most in the USA and Britain, but some in places as far flung as Serbia and Fiji.
Falkland
Did you know that the oldest tennis court in Britain is to be found at Falkland Palace - it dates from 1539? It was used by James V and a young James VI of Scotland, the future James I of England, as the Renaissance-style palace was the Stuart hunting lodge from its construction to 1625. It was also visited in 1958 by Queen Elizabeth II . It is of course a real tennis court; but of a rather rare type, the jeu carre.
Leuchars
Did you know that RAF Leuchars is the oldest continually operating military air base in the world? Its roots predate the Royal Air Force and even the Royal Flying Corps  Leuchars was first used for aviation by Royal Engineers personnel operating balloons in 1911, the RFC came into being the following year. The airfield at Leuchars was begun in 1916.
St Andrews
Did you know that St Andrews can lay claim to be the "home" of Golf ? Between 1897 and 1952 the Royal and Ancient Golf Club there was the rule-setting authority for the game worldwide; since 1952 it (and its offshoot The R&A) has shared that duty with the USGA.
Did you know that Mary Queen of Scots was a member of the local golf club and can probably be regarded as the worlds first female golfer? With all the tact for which she was renowned she played at St Andrews shortly after her husband Darnley was murdered.