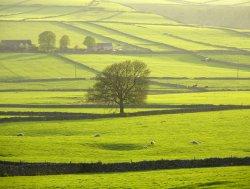 Ashbourne
Did you know that Each Shrove Tuesday and Ash Wednesday Ashbourne is the scene of a very famous football game . This is a robust match, kind of a free for all with goals three miles apart. Its origins are believed by some to be medieval
Bakewell
Did you know that legend has it the world famous Bakewell Tart was created accidentally by a cook in the towns Rutland Arms Hotel in 1820? It is said the almonds, sugar and eggs which ended up as a custard layer above the jam were intended by the landlady to enrich the pastry of a jam tart.
Did you know the Emperor Fountain at Chatsworth is the tallest in Britain  its waters reaching twice the height of Nelsons column. It was designed and built by Joseph Paxton , best-known as architect of the Crystal Palace .
Buxton
Did you know that, at 1000 feet above sea level, Buxton is the highest market town in England? That elevation means the average annual temperature is below 8 degrees Celsius, which is a full 20 degrees below the temperature of the geothermal springwater which flows from St Anns Well in the town.
Chesterfield
Did you know that George "rocket" Stephenson is buried beneath the altar of Holy Trinity church, Chesterfield
Clay Cross
Did you know that the first oil-field proper in Britain (as opposed to the oil-shale found in the Scottish Midlands) was at Hardstoft near Clay Cross in Derbyshire? It was discovered by the Mexican Eagle Company in 1919. The first commercial oil-field in this country, however, was at Eakring near Newark, the find in the late 1930s large enough to be of strategic importance  and kept secret - in WWII.
Derby
Did you know that the first water-powered factory in England was opened in Derby in 1722? It was a silk-mill built to a design that John Lombe provided, having used industrial espionage to obtain it from Italy. He died mysteriously that same year, local legend saying he was poisoned by a female spy sent from Piedmont.
Hathersage
Did you know that Robin Hoods right hand man - Little John - is buried in a huge grave at the church in Hathersage? He is said to have returned to his native village after burying Robin Hood ; there he prepared his own grave beneath an ancient yew in the churchyard. The alternative and far less romantic explanation for the stones marking the head and foot of the grave is that they were the local standard for the pole, a measurement of 16 feet six inches.